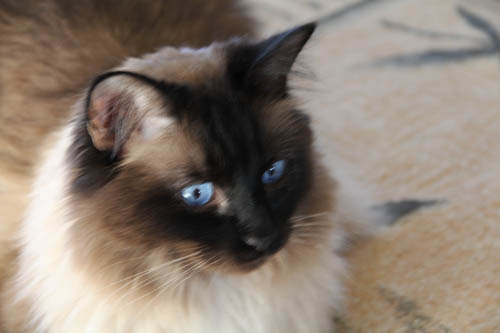 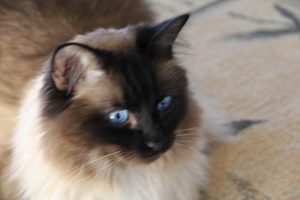 Oops had a cat health issue and completely forgot to post yesterday. Kind of what happens when you aren’t in the habit of something, not really, strongly.

Long ago, when I blogged as my cats, I would have used that for more fodder for a post but this time it just threw me off.

Someone had a bit of blood in their urine in the litterbox. The first hour of the morning was devoted to trying to parse which one it was. Ham hadn’t been around to use that litterbox before I noticed blood so he was out. That left Ichiro and Gemini.

It seemed like more likely to be Gemini but because Ichiro is a boy and the weekend was coming, I decided to test him first. And yes. It was him. He’s now on antibiotics and we’re slightly tweaking his diet in hopes that this doesn’t come back. 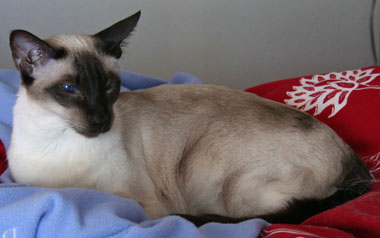 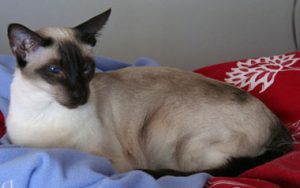 Chey was three years old when I got her. She’d belonged to a breeder who didn’t like the kittens she was throwing so for the cost of her spay, she became mine. A purebred chocolate point who knew exactly how extraordinary she was.

She hated me at first. Wouldn’t come out. Wouldn’t do much of anything. And then she met my other cats. She fell in love with my calico, Georgia. Gemini made her feel comfortable as she was just about the same age as the kittens Chey had been forced to leave behind. And slowly, she decided I was okay to become her person.

She’s been gone for three years now and I still miss her. I love my other cats, but Chey was special.

My husband and I have to travel in a few weeks and I was thinking about the places I’ve lived and people who were pet sitters for my cats.

Long ago, one of my friends used to live in a tiny, tiny little house, before tiny houses were a thing. She and her partner didn’t have a washer/dryer nor did they have a television, so when I was gone, she’d cat sit and do laundry and they’d catch up on some television. This was one of my selling points to have them come by!

Anyway, one day, her partner goes through Taco Bell and gets a burrito. My orange cat wouldn’t not leave him alone. When she tells me this, she just says she doesn’t know what was wrong with my Iggy Cat. And she talks about how he was all over her partner. And I’m hmm… maybe he was lonely? Then she says her partner could hardly even eat his Taco Bell burrito.

It all became clear to me. This cat had always been fat (hence my publication name, My Big Fat Orange Cat) and always wanted what I was having. I used to feed him strips of lettuce from the top of tacos from Taco Bell so he started associating the smells of Taco Bell with getting food. As he aged and I wasn’t as careful about what he ate, sometimes I’d offer to let him lick some of the beans from a bean burrito, which he also loved. He never got people food otherwise, and, in fact, wasn’t as interested in other people food but this cat had developed a taste for Taco Bell.

I laughed so hard it took me almost ten minutes to explain to her that odd as it sounded Taco Bell was this cat’s favorite treat. Not that he was allowed to have it on a regular basis.

Cats are strange. While I understood that cat, I still haven’t figured out my little Gemini girl.

I don’t know what’s up with my cats. One was out of sorts and another had litterbox issues. And while they are both eating and drinking, neither is exactly themselves.

The third is fine, so far as I can tell but I suspect, even were he under the weather, he wouldn’t act much different and would go hide, which he is. Although that’s sort of normal this time of day.

So I don’t know what’s going on, if I should be worrying, or if it’s just a minor blip. They eat the same food they’ve been eating and suddenly things aren’t as good as they were. The only change I can see is the weather and if it were drippy eyes I’d think maybe that was it, but it’s digestive and that doesn’t seem normal for them.

I guess I’ll worry and wonder because there’s no real reason to rush to the vet, other than they just ain’t right. Cats. I wish they could talk. 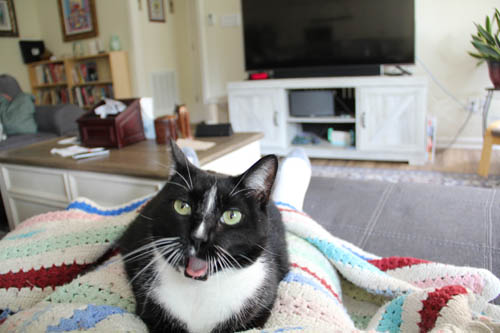 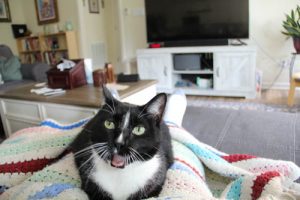 This is Ham. He’s my problem child. This morning, I found two of our homegrown tomatoes on the floor of the kitchen.

He likes to knock things on the floor. Anything that rolls.

I had to throw one away because someone, possibly Ham, possibly our other cat Ichiro, bit into it. As it was not chewed, I’m thinking they didn’t like it but there were two perfect little vampire punctures in the tomato. Fortunately, it’s that time of year and there are more where this one came from. 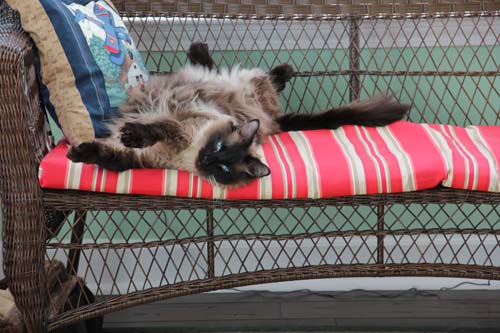 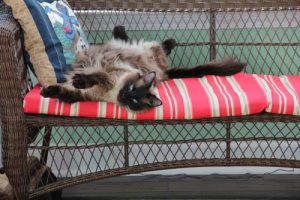 And this is what he does on the desk too but it’s hard to get a photo of him lying like that on the keyboard because he has to lean against my chest.

I think I need longer arms to accommodate him and still write!